For those who view ERC-20 tokens as potential investment opportunities, now may be a time to pay slightly closer attention. In the 20 day period from September 7 to September 27 of 2018, a sample of 574 ERC-20 tokens from the Ethereum One dataset was observed. The average price of those tokens in US dollars, weighted by their market cap, was calculated for each day. Below is a visualization of that data; the labels on the chart reflect the percent change since September 7. 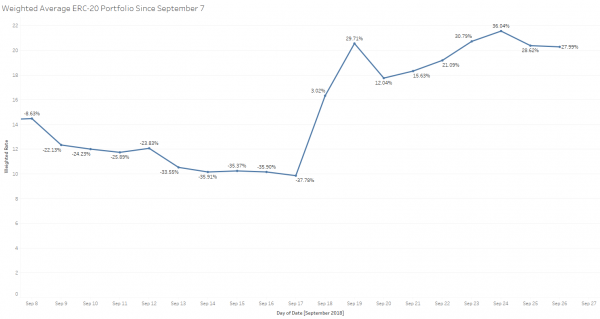 We see that a weighted average portfolio would be up 28% since September 7, and would have experienced a maximum drawdown of just under 38% since then. Since September 17, the ERC-20 market has fared well for bulls. Moreover, of the 574 tokens observed here, 198 of them — or about 34.5% — are above their 20-day moving average, suggesting a solid cohort of tokens that have some momentum behind them.

Now for the obvious question: why are these tokens rising?

First, it does not appear to be momentum or trend on a per-token basis — as there is essentially no correlation between the percentage change for a given token and its market capitalization, suggesting both small and large tokens are rising. In other words, the collective rise in the sample of 574 ERC-20 tokens is not a case of a few large tokens lifting up the whole portfolio; returns are not correlated with market capitalization. The chart below illustrates. 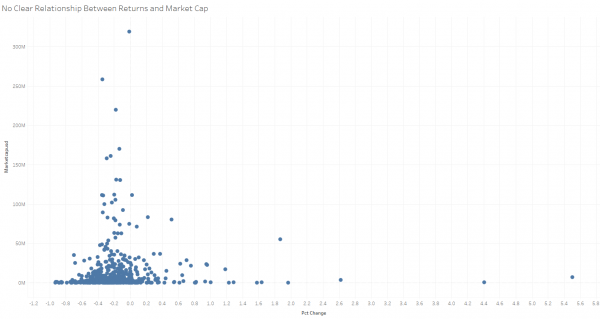 Second, there does not appear to be a discernible relationship between growth in transfers logged on the Ethereum blockchain and change in price. The chart below illustrates. 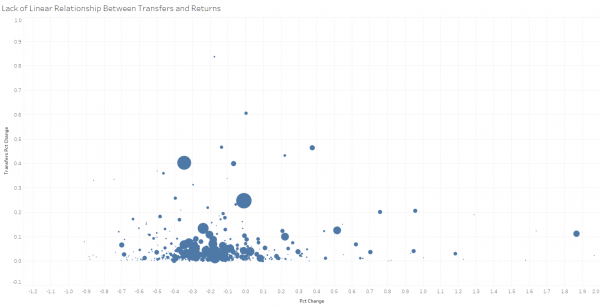 However, for those who do believe in the utility hypothesis — namely that tokens that are used more will rise in value — it may be worthwhile to explore tokens that are seeing greater utility in the form of transactions that are logged on the Ethereum blockchain. Perhaps the hypothesis is true, and the lack of a correlation between utility growth and returns growth is indicative of mispricing in the market and thus an investment opportunity. For crypto investors of such a persuasion, the chart below may be of interest: it shows the 198 tokens that have momentum in the sense that their price is above the moving average, and their transfer growth rate percentile ranked (after adjusting for market cap so that higher market capitalizations were penalized; mathematically, we took the transfer growth rate and divided it by the natural logarithm of the market capitalization). 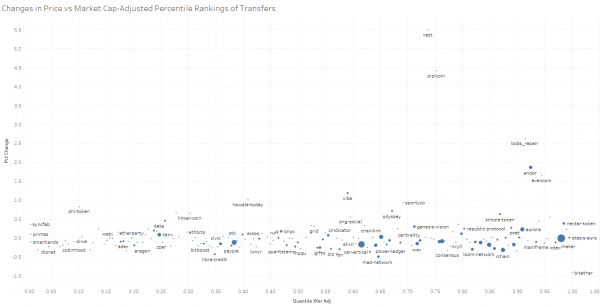 From this perspective, tokens in the bottom right of the chart — those that have shown a high growth in market cap adjusted transfers relative to other tokens but have not seen a commensurate increase in price may be an opportunity consistent with the outlook of those who embrace the utility hypothesis.

How Much Do You Know About Cryptocurrency

2018 Is The Year Crypto Currency Millionaires Are Made

Corporate and Government Blockchain Use | Is it Really Being Used? If So, Why?

Security Tokens – Are They Really Happening?

Passwordless Future With Blockchain: Debunking The Myth That Passwords Make Us Safe

Passwordless Future With Blockchain: Debunking The Myth That Passwords Make Us Safe