Why, though? What did the Ripple CEO say? Is there specific Ripple news causing XRP to be up? Well, luckily, we have the answers to those questions.

On Wednesday, Brad Garlinghouse, the Ripple CEO, stated that while crypto prices have, in the past, been correlated with BTC, that pattern may soon meet its demise. For that to happen, said Mr. Garlinghouse, the markets will have to realize that there are notable differences between these assets.

He proceeded to explain that speculation currently dominates the crypto market, and it’s only a matter of time until people fully realize and “understand the different use cases.”

This is not the first time the Ripple CEO has talked about Bitcoin. In fact, the last time he spoke about the virtual currency wasn’t too long ago. At Recode’s Code Conference, Garlinghouse called Bitcoin “the Napster of digital assets.” If you don’t remember Napster, this is marginally offensive towards Bitcoin. Napster was a music service that, while changing the rules of virtual music, never succeeded.

Meanwhile, XRP is making some noise on the market, finding itself in the green zone. At press time, Ripple (XRP) is selling for $0.61. This puts XRP up 3.66% in the past twenty-four hours. 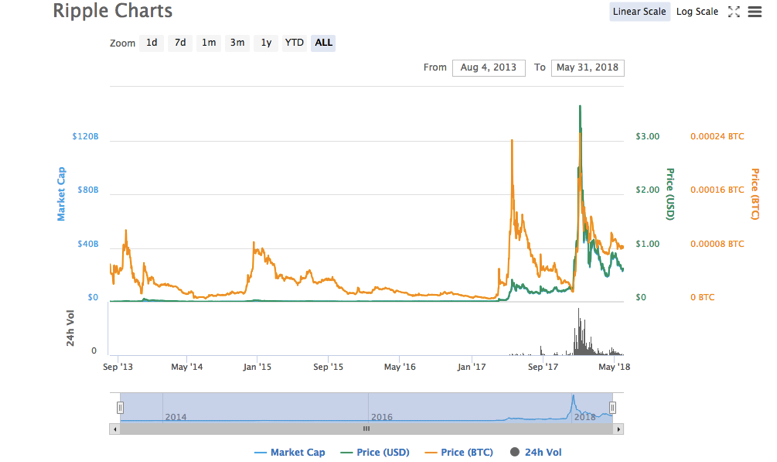 This week, we have seen one piece of Ripple news make waves. Ripple confirmed that Kuwait Finance House joined the RippleNet. This move indicates that the Islami bank supports Ripple’s vision.

KFH is not the only institution that supports Ripple’s vision, either. Actor Ashton Kutcher’s tech investment fund is invested in Ripple and recently donated $4M on behalf of Ripple to the Ellen Wildlife Fund.

Wow! What an incredible surprise!! We love you. We thank you. #WeNeedGorillas @aplusk @guyoseary @Ripple pic.twitter.com/JgznXFxWAI

While presenting the donation, Kutcher praised Ripple, stating that it is an organization that actually cares about making a change, and being involved in different use cases. Which, as we’ve now seen, is what the Ripple CEO believes too.

Do you have any thoughts on the performance of Ripple this week? Both on the market, and the overall Ripple announcements?