NEO and GAS are leading the cryptocurrency market today as the coins with the most percentage gains, but there are a few others trailing right behind. 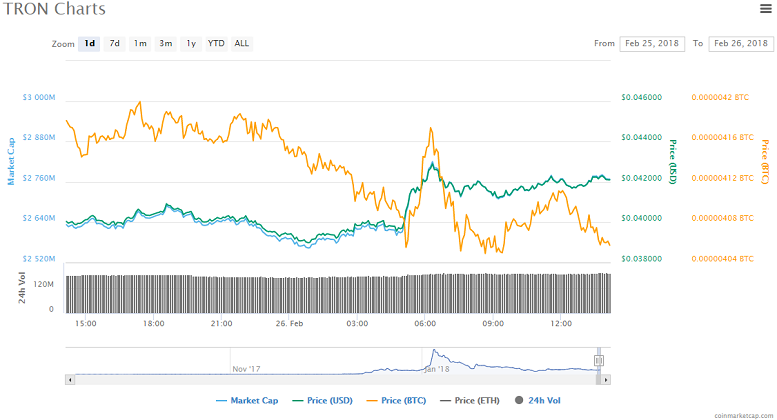 TRX saw a slight price increase today, as it had a downward trajectory most of last week. On Friday Tron’s founder, Justin Sun, tweeted that Tron’s main net will be released earlier than previously anticipated. Today, Sun sent out another tweet that the details for the main net and it’s early release will be given to the public sometime this week.

This is big news for Tron enthusiasts and holders, as many anxiously await a working product. If the Tron team gets the main net up and running around the same time the Tron Dog games allows for breeding, the coin could skyrocket in its price. If you were debating adding TRX to your portfolio in the future, now is the time you might want to buy in.

Just yesterday, an article was published on the cryptocurrency stating how the coin might be in trouble. Many coins have been hit hard by the 2018 ‘bear market’ but it seems in comparison Bitcoin Cash has been hit the hardest. On most large cryptocurrency exchanges to date, BCH is down around 80% from its record high.

Most of the other large coins are only seeing losses from their highs of around 50%. The coin was forked back in August 2017 and offered bigger block sizes. However, it seems that newer altcoins are taking over.

Nano, previously RaiBlocks (XRB), is among the top coins trading today. A press time, NANO is trading for $13.73 a coin, up 11.21%, in 24 hours. NANO’s platform offers instant transactions and zero fees. You can trade for the digital currency on Binance, Kucoin, Bit-Z, OKEx, and Mercatox.

Singapore-based Qtum is a popular cryptocurrency among Chinese natives. The project is an Ethereum and Bitcoin hybrid which combines the Bitcoin Core infrastructure, proof-of-stake (PoS), and their own version of the Ethereum Virtual Machine (EVM).

Currently, Qtum has 6 functioning decentralized applications, 12 DApps in process and four in the prototype phase.

Are Stablecoins the Future? The Winklevoss Twins Seem to Think So!